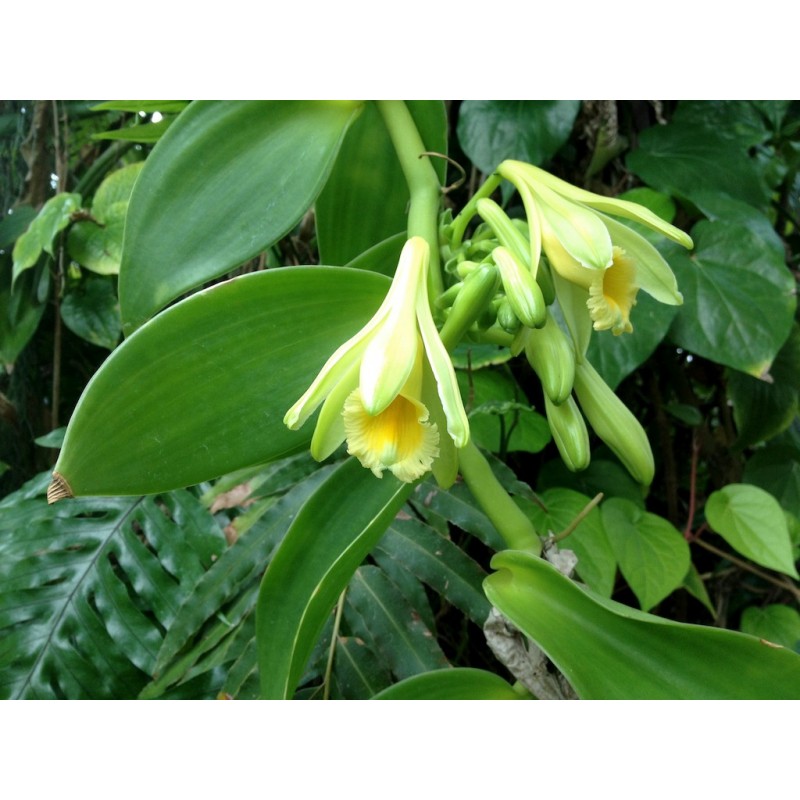 Supple and not very branched, the liana native to Mexico and called vanilla, develops by growth of the terminal bud and forms long shoots which can attack their support for more than ten meters.

The ovary is inferior. There is no floral pedicel. The flowers have a tab (rostellum) between the stigma and the anther. There are about 20 flowers per inflorescence.

The current official scientific name is Vanilla planifolia, but among the synonyms that were once used, several are still in common use:

The vanilla tree needs a warm tropical climate (between 20 and 30 ° C) and humid. It is a hemiepiphytic plant that grows along shaded supports, direct sunlight causing the leaves to die. The plant climbs along the supports using aerial roots. Like most orchids, the vanilla tree needs a symbiotic fungus of the genus Rhizoctonia in order to develop.

The plant reproduces naturally by cuttings. The flowers of the vanilla tree are collected in inflorescences with fifteen to twenty flowers. Pollination occurs naturally in Central America, three or four years after the emergence of the plant. The responsible insects would be bees specialized in the foraging of orchids, the Euglossines, mainly the species Euglossa viridissima and perhaps also Eulaema cingulata. The Melipones, in particular Melipona beecheii, considered at one time as the fertilizers of vanilla, however seem today to be discarded by entomologists2. In cultivation areas devoid of this bee, pollination is carried out manually. After pollination, capsules in spikes develop. The fruit produced, called vanilla, is an important spice.